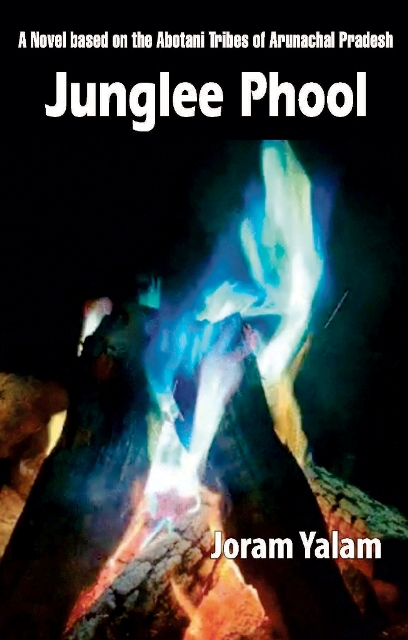 JUNGLEE PHOOL (A Novel based on the Abotani Tribes of Arunachal Pradesh)
₹160.00 - ₹300.00
Show Options
Skip to content

10 in stock (can be backordered)

There are 26 main tribal societies in Arunachal Pradesh and Tani tribes (Adi, Nysee, Apatani, Galo and Tagin) is one of the most prominent ones. Tani (father), the famed ancestor is made known in the society through popular folk tales. He is depicted as a polygamous, loveless, lustful, vagabond and ruthless rapist. He is one who uses his extraordinary vigour, vitality and wisdom only to acquire women. His image portrayed so far has been very different and squarely down to earth. Yalam not only very brilliantly breaks this myth but also artfully reconstructs a new modified Tani using her skill of storytelling and imaginative deftness. The result of her art is this novel – Wild Flower. The novel is an extraordinary creation of a creative mind. This work not only presents a historical life-journey of Tani tribes but also its culture and society’s authentic internal image. The novel is also successful in portraying some of the traditions, blind beliefs, internal and external fights and customs related to rampant torture of women. It also becomes a mouthpiece for the oppressed and those who wish to live in peace in the now-found society. The writer’s progressive humane point of view is aimed at transforming the wide-spread tribal society. In modern literature being written by a small educated intellectual class in India’s tribal societies, the novel celebrates the glory of love in numerous forms. There are many powerful feminine characters we cannot live without being influenced by their instinctive naturalness. This bold work proclaims the relationship between men and women as its ideal and has become very readable due to its beautiful and ornate language. The authentic depiction of her society and her revolutionary call for social transformation makes the novel a rare work in the literature being written there.

For me, the meaning of being ‘jungli’ or ‘wild’ is as follows – to be associated with nature; to pace along treating oneself as a part of it; one who could smile in the company of the flowers. One who could hear the call that comes from the innermost chamber of the ocean deep heart and could spread like the golden rays of the sun. One hand touching the sky when the other touching the earth! Germinate and grow even out of a handful of dust found on the top of a rocky hill! Bloom for an instant and die! A wild flower flourishes and smells wonderfully well even in the absence of moonshine and the light of the sun. It blooms in places unfathomable by human eye and beyond our imagination. This is a continuous flow like a river. The courage to stroll and march ahead the newest possible ways and the courage to face fearlessly is the nature of the wild. The forest is never partial. Life is non-aligned there. The flowers that flourish here have their own will and wish. They have neither attachment nor detachment; neither selection nor rejection. Jungle is the name of liberty from all types of bondage and burden. That liberty emanates from ultimate discipline. Though the forest is for all, yet it is not the property of any one. That is why it is jungle, the forest. Tani was the flower of the forest. That is why he was called father. That is why he could experience love. Let me say this way – he declared love. No impediment, no imperative, no fright could stop him. He sprouted again and again in any circumstances. Sprout into flower was his ultimate intent. There was life in his bloom.

…An excerpt from the novel

Yalam was born on 5th March in Joram village of Lower-Subansiri district (Arunachal Pradesh). Presently she has been serving as Assistant Professor (Hindi) in Rajiv Gandhi University after obtaining Ph.D.( Hindi). A born story teller, she got her first short story collection “Sakshi hai Pipal” consisting of 9 long stories published in 2012. Her second collection of folk tales “Tani Momen” appeared in 2014. Inspired by her culture and surroundings and the resounding success of her first two collections, she had come up with a full length novel ‘Jangali Phool’ in Hindi in 2018 (first edition) and 2019 (second edition). ‘Wild Flower’ is its translated version.

There are no reviews yet.